Skip to content
Contents hide
Who Is MrBeast?
Education
Where Did MrBeast Go to College?
What Did MrBeast Study in College?
Pursuing a Dream
Conclusion
Author

In February 2017, MrBeast looks into the camera and excitedly holds up an English dictionary. “We’re doing this in one video,” he says as he smacks the book, “Yeah! Ready to grind it out.” For the next seven hours and 45 minutes, MrBeast challenges himself to read the entire English dictionary in one sitting.

Interestingly enough, this YouTube video alone reached over 3 million views. Only a few years later, he would be known as one of the most viral philanthropists on YouTube with an estimated net worth of $18 million. With a figure that high, many instinctively wonder just what he did to get there. The evidence is clear – MrBeast has a large sum of money and is educated enough to have earned it. However, the question that still intrigues his millions of fans is fair: Did MrBeast go to college?

Jimmy Donaldson, known across social media as “MrBeast”, is a famous YouTuber who earned the title of one of the most-viewed channels of 2019. The 22-year-old star is known for pulling off wild stunts and giving millions of dollars away to people including friends, Twitch streamers, and even random strangers across the world. As of September 2020, MrBeast has grown a following of 44 million on his YouTube channel alone.

Everyone among YouTube stardom had to start from somewhere, and MrBeast is no exception. His childhood and adolescent education were significant steppingstones toward his adult decisions and ultimately, his current success.

From Pre-K to Graduation

At a young age, MrBeast attended Greenville Christian Academy, where he stayed and completed his childhood and adolescent education. Founded in 1961, the school is an accredited private school located in Greenville, North Carolina, where MrBeast was raised. He graduated from there with his high school diploma in 2016. Greenville Christian Academy is a highly rated academy, with divisions covering preschool to 12th grade.

In a biographical “Draw My Life” video uploaded in January of 2020, it is stated that MrBeast was a fairly average kid. He went to school, obtained passing grades, and played video games. He continued to upload videos throughout his grade school years, and at 15, he began uploading gaming commentary. He was especially focused on his YouTube channel during high school, even investing money in gaining subscribers.

MrBeast’s opinion on high school – or schooling in general – was spilled in a video that he uploaded toward the end of his senior year, in 2016. The title itself is self-explanatory: “School Is A Waste of Time”. The entirety of the video is a playthrough of Call of Duty with commentary from MrBeast explaining his feelings regarding high school. He states, “We spend the first 18 years of our life, sitting at a desk, learning pointless information – 99% of which, we’re never going to use.” Judging from his blatant confession, fans can assume that he did not enjoy high school.

In late 2016, MrBeast gave college a try. While the details of his college education are few and far between, MrBeast spilled some personal details during a Q&A in July 2019. He states, “I went to college for two weeks and I hated it.” He later tweeted in November 2019, following an explanation of dropping out of college, saying, “Regardless, I love YouTube and I want to do this until the day that I die.” 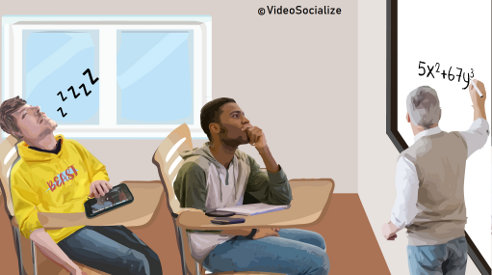 Where Did MrBeast Go to College?

Information on MrBeast’s time in college is hard to come by. However, in a tweet posted in 2019, MrBeast explains that alongside his choice to quit college came his mother’s choice to have him move out. It seems that he had been residing with his mom in Greenville during his two weeks in University. By knowing where he was living while going to college, we can make some educated guesses that MrBeast attended one of two nearby colleges.

An article by The East Carolinian describes a hiring event put on by MrBeast and his team at ECU in 2020. Greenville residents seemed thrilled at the fact that their own, MrBeast, made an appearance at ECU. MrBeast’s enthusiasm for finding and recruiting interns, from ECU in particular, may illuminate a sort of kinship between him and the school. While it is not clear that ECU is where MrBeast had enrolled in college, his effort to take on its students as interns is a promising theory.

What Did MrBeast Study in College?

Being short on details about MrBeast’s few weeks in college, it is also hard to know which classes he may have enrolled in. Regardless of MrBeast’s choice of university, most colleges offer various courses and academic programs. Nevertheless, the majority of courses taken within the first two years of college are general education classes.

With an unknown declared major, the options of courses are endless. Be that as it may, it is easy to guess that any freshman’s schedule in college includes introductory courses and those that meet general core requirements. It is more than likely that basic lectures filled MrBeast’s agenda during his first semester in college. If that was the case, his schedule might have looked something like this:

In his “School Is A Waste of Time” video, MrBeast reveals that, “I used to be really good at math, but ever since they introduced the alphabet into math, I’ve had straight C’s.” He then moves on to a question concerning History, “Why do I need to know this? How is this ever going to help me in life?” Toward the end of the video, MrBeast confesses that he merely hates learning and has always felt that it is useless.

MrBeast’s expression of his feelings toward academia is likely an exhibition of his early desire to drop out of college. Much of his dislike for learning centers around many subjects that potentially filled his course schedule during his first semester of college. Consequently, MrBeast could have possibly been pre-inclined to quit university studies long before anyone knew that he would.

Despite dropping out of college, MrBeast went on to pursue his life-long dream of becoming a YouTube sensation, and he did just that. MrBeast posted his first YouTube video at only 12 years old. After wrestling with the YouTube algorithm for nearly eight years, MrBeast successfully integrated the perfect content into his channel to make his videos go viral. Since striking a viral gold-mine with a video of him counting to 100,000, he has partnered with large companies – including Quidd and Seatgeek – to lock down plenty of six-figure brand deals. MrBeast’s business skills might not have come from a college education, but his fortune doesn’t lie.

So, did MrBeast go to college? Technically, yes. While there isn’t much information out there regarding his college career, MrBeast has confessed numerous times that university just wasn’t his cup of tea. Although he dipped his toe into the pool of academia, he ultimately decided to follow his passion and has since become one of the most successful YouTube sensations today. At only 22 years old, MrBeast is living proof that a college degree wasn’t necessary for the career he hoped to pursue.

Would you like to meet some new people to talk to on a topic you find interesting?
Check out these Zoom mixer meetings to chat about your hobby or obsession.